Our office is open. See Dr Kethu via Televisit. We are taking all precautions to schedule and perform procedures safely during this COVID-19 pandemic.

Anyone can have gallstones. Some people are most likely to get them-

How do gallstones form?

The gallbladder stores bile, a fluid made by the liver. The bile helps digest fat in our diet. If the bile is too thick or if there is imbalance in the chemicals that make up the bile, gallstones can form. 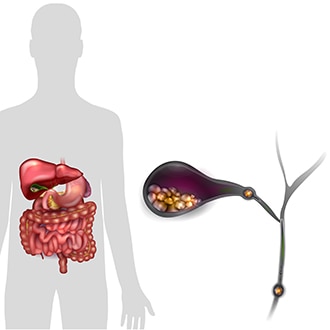 Not all people who have gallstones would have symptoms. Common symptoms include the following-

What diagnostic tests are needed?

Ultrasound/sonogram of the gallbladder is probably the best test to detect gallstones. The stones can also be detected when you have a routine x-ray or a CT scan of the abdomen.

What is the treatment for gallstones?

Gallstones are treated only if you have symptoms. Removing the gallbladder (cholecystectomy) is the best way to remove the gallstones. Although there are medications available to dissolve the stones, they are not very effective. Sometimes, you may need a procedure called ERCP (endoscopic retrograde cholangiopancreatography) where a thin tube with the video camera is passed through the mouth to access the bile duct to remove the stones if they’re blocking the bile duct.